Do you want to know which product best suits your situation?

This page contains information about the popular hair growth agent Minoxidil, which is applied to the scalp in the form of a topical lotion.

Minoxidil is a well-known lotion for promoting hair growth. It is also one of the oldest hair growth products on the market. The market has undergone a development: products are now available with ingredients that work just as well or better for many people than Minoxidil. The Minoxidil lotion is also very greasy and dries out the scalp. These major disadvantages have been solved with newer products. If you want to buy Minoxidil, then it is good to first look at the alternatives for Minoxidil. Below we explain the three most important alternatives to Minoxidil.

Minoxidil has been around for quite some time. It was developed in the fifties of the last century as an antihypertensive agent in pill form under the brand name Loniten. During the test phase of the product, a striking side effect was discovered: hair growth increased on all limbs and the heads of the test subjects. 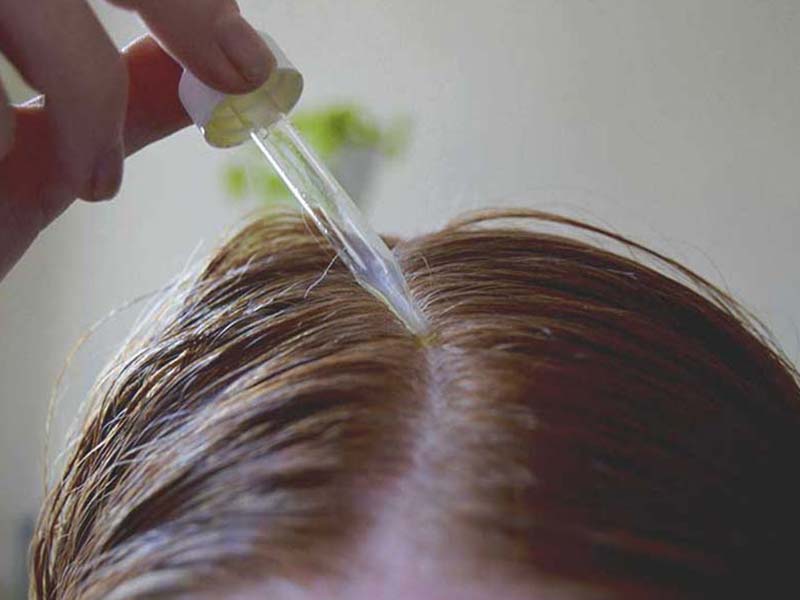 After discovering the hair growth stimulating effect, Minoxidil has been further developed. This resulted in a minoxidil-containing lotion that was brought to the market in 1988 under the brand names Rogaine (US) and Regaine (outside of US). Rogaine became the first officially registered and proven hair growth agent on the market.

Meanwhile, the patent on Minoxidil has expired, and many cheap generic versions have been brought to the market (Kirkland, Spectral UHP). Minoxidil lotion is not only available as a 5% solution, but a special 2% solution is also available for women. Apparently studies have shown that a higher dosage is much more effective: of the 5% version, 45% would be more effective than the 2% version. Yet, people are often recommended to start with a lighter version to see if any side effects occur, such as excessive hair growth or low blood pressure. It is always advisable to consult your doctor before using higher concentrations of Minoxidil.

How does Minoxidil work?

A lot of research has been done in the past years to explain the effect of hair growth of minoxidil. The effect is not yet completely understood. Originally, it was believed that minoxidil improves the blood circulation of the scalp, but this seems outdated. The most recent theory is that it is because minoxidil belongs to the group of medicines called 'potassium channel openers' (PCOs). It seems that PCOs stimulate hair growth. In any case, the agent has absolutely no effect on the hormone balance, unlike finasteride and dutasteride. Because it is not a hormonal agent but has a general stimulating effect on the hair growth, minoxidil can be used for many forms of hair loss (not only androgenetic).

Minoxidil has many satisfied users, but it is not a panacea. A positive effect is determined in 60 to 80% of its users (stabilization of regrowth), but the result is only "cosmetically satisfactory" for 6 to 30% of its users. People who have been suffering from hair loss for a long time can benefit from it, but completely new hair growth on bald spots is a rare occurrence. The agent works best for men and women who have been suffering from hair loss between 5 to 10 years, particularly on the crown.

There is reason to believe that Minoxidil works as long as it is continuously applied. The recovered hair by Minoxidil will remain "minoxidil dependent". Research has shown that men who had regrowth with both finasteride and Minoxidil, noticed regression after stopping with the use of Minoxidil.

Although Minoxidil stimulates hair growth, it actually does not change anything about the underlying cause of androgenetic hair loss (reduction in hair growth due to affected hair follicles by DHT, dihydrotestosterone). So the agent has no anti-androgenic effect and therefore DHT binding to androgen receptors of the hair follicles is not obstructed. Eventually, the use of Minoxidil alone is not enough for most people to permanently prevent hair loss.

Just like all other hair growth agents, Minoxidil needs to be used continuously in order to maintain any obtained results.

Side effects of Minoxidil

Minoxidil lotion can be regarded as a safe agent. Side effects that are occasionally reported are: dry skin, dizziness and headaches. Additionally, a slight increase in body and facial hair can occur, due to small amounts of Minoxidil entering the bloodstream through the skin. Some doctors believe that Minoxidil can be dangerous for people with cardiovascular disease. On Internet forums for people with hair problems, side effects such as eye bags caused by fluid retention are sometimes mentioned.

Minoxidil in combination with other products

The combination of Finasteride and Minoxidil is popular among people with androgenetic hair loss. Although studies have shown that the use of Finasteride alone is more effective than using only Minoxidil in the battle against AGA in the long term, it was revealed that the agents work great together, better than just one or the other. The reason for this could be because both the growth is being stimulated and the androgenetic causes are dealt with.

Another popular combination is Minoxidil with a good quality shampoo.

Nanoxidil is an ingredient which is available in the lotion Spectral DNC-N. Unlike Minoxidil, Nanoxidil is especially developed to stimulate hair growth. For this, it has been studied how the molecule of Minoxidil could be improved to make it more effective and to reduce side effects. From this research, Nanoxidil has been developed. Nanoxidil has a lower molecular weight, improving absorption.

Spectral DNC-N contains various extra ingredients to stimulate the effect of Nanoxidil and to increase the effect on the hair growth. Also, there are far fewer side effects to be expected. For people who experience side effects with Minoxidil, switching to Nanoxidil might be a good alternative. 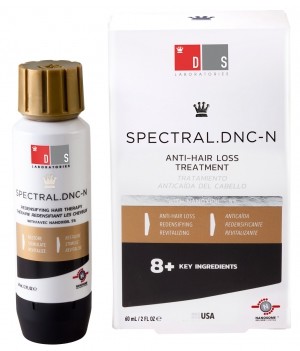 Nanoxidil is also a good replacement for brand name Minoxidil lotions like:

What's the difference between Minoxidil and Nanoxidil?

Minoxidil is a drug that was initially developed against hypertension. Clinical studies have shown that the test subjects got stronger hair growth because of the use of Minoxidil. As a lotion, it is one of the most well known treatments against hair loss. However, apart from this excellent effect, Minoxidil comes with a lot of side effects, such as heart problems, headaches, acne and local irritation. Women are more sensitive to Minoxidil, that is why it is recommended that women use a maximum concentration of 2%.

Nanoxidil was especially developed to maximize the stimulation of hair growth, by taking away the side effects of Minoxidil as a lotion and to surpass the effectiveness of stimulating hair growth. The difference between Minoxidil and Nanoxidil is mainly the difference in molecular structure. The agent Nanoxidil, which is responsible for opening the ion channels, has a larger molecular weight than Minoxidil. This is the reason it is absorbed better by the skin. Clinical studies have shown that Nanoxidil has much fewer side effects than Minoxidil.

The lotion Spectral.DNC-N contains, apart from Nanoxidil, various ingredients to promote the absorption and to improve the hair growth in multiple ways. Minoxidil lotions however usually only contain Minoxidil. Additional substances that stimulate hair growth include Adenosine, Aminexil, procyanide B2 and copper peptides.

Spectral.DNC-N with Nanoxidil has been clinically tested for safety and effectiveness in over 250 people for 1 year:

Switch from Minoxidil to another lotion

Many customers who have used Minoxidil in the past have switched because of side effects or a non-satisfactory effect.

If you are currently using Minoxidil and want to switch to a different lotion, we recommend using both lotions next to each other for two weeks. For example Minoxidil in the morning and the new lotion in the evening. After two weeks, your scalp and hair follicles will get used to the new lotion and you can start using the new lotion twice a day.